This book is the translated version of humor and satire works composed by an Iranian artist. You can read a wide variety of genres in this book, ranging from one-statement works to short pieces and stories. Reading this book would familiarize you with one of the current Iranian satire artists. This summary helps you become more familiar with this book:

Modern Diary of a Madman
Brawn-Day
The Boogeyman died. Maintaining his official position as the head of Modern Times Sanatorium, he was also in charge of scaring us on power cut nights. Last night, he died naturally from the blow I, Leonardo Da Vinci, gave him right on his skull. The new boss is supposed to be elected tomorrow. The candidates include, King Kung, Godzilla and Hercules. I have no clue which one would bump off the others, but I am sure whoever managing to do that job successfully would easily be able to bump off us all.
Run-Day
There will be a dog sled racing next week. Most of the folks had already bet on White Fang. Jack London (White Fang owner) states that his dog has recovered only recently and should not have been put on the race but he needed the reward to buy the gold ring his wife asked for. On the other hand, Tintin is very confident about his dog winning in spite of Jack, and claims that Milou is quite in the zone and is expected to leave the field as a champion. I have no clue what “in the zone” means, but I think I will bet on Milou. Yeah, great plan, I sure will.
Read more in the book!
Modern Murphy’s Laws
Party Food
* When you have a few guests, since you are preparing the meal in an amount different than usual, the quality of the meal always ends up less than normal in comparison with the meal you ordinary make, or even tastes bad to some extent.
* In such circumstances, your husband and children would keep asking, “What have you poured in this food to make it so delicious?!”
* If food is too much, nobody would like to eat it.
* If the food is insufficient, then everybody especially your husband and children would like to eat twice as usual!
Read more in the book!
Cariwordators1
* I feel pity for those who spend hours planning to waste every single second of their lives.
* The scarecrow needs to wait until winter to become a snowman.
* Yalda2 is the nightest night of the year.
1 A blending term I have coined originally from Cari-Kalamator, a combination of Caricature and Word literally meaning satirical wordplay.
2 Yalda “Birth of Mitra” is the Persian winter solstice celebration which has been popular since ancient times. Yalda is celebrated on the Northern Hemisphere’s longest night of the year about December 22 each year.
Read more in the book!
Chaos City
Chicken or Egg?
* Which do you think came first, the chicken or the egg?!
* Neither one, the rooster came first.
* How come?! That can’t be.
* It can. Just like the way Adam came before Eve!
Children Book
* Hello, there’s a children book published lately with hardcover as big as a kids grave, do you have it here by any chance?!
* I’m afraid not, mam. The books we sell in this store are only big enough to lead adults to the graveyard.
Read more in the book!
(Written in) Exam Papers
Ladies or Gentlemen?
– …May I ask why do you always give the best grades to ladies, but do injustice to gentlemen? [From the exam paper handed over by a male student.]
– …May I ask why do you always give the best grades to gentlemen, but do injustice to ladies? [From the exam paper handed over by a female student.]
– Moral of the story would be equal cruelty is justice!
– Immoral of the story would be the grass is always greener on the other side of the classroom!
Read more in the book!
Profound Words
* Dictatorship is an individualistic democracy.
* Once they gaze at the night sky, some self-centered people wish to have the moon wink at them.
* Regulated relationships overpower regulations on relationships.
Read more in the book!

If you live in Iran, you can also buy the book from the Persian section of this website. 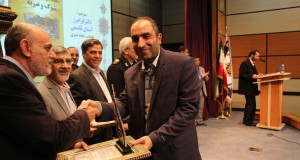 Top Researcher of Faculty and Translator of Top Book of University 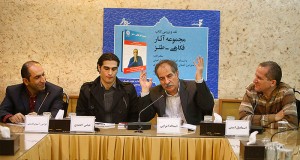 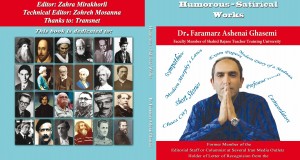 Satirical Works must not be Time-Bound